So I just got back from London and OH MY GOD I GOT TO MEET JAMES MCAVOY. 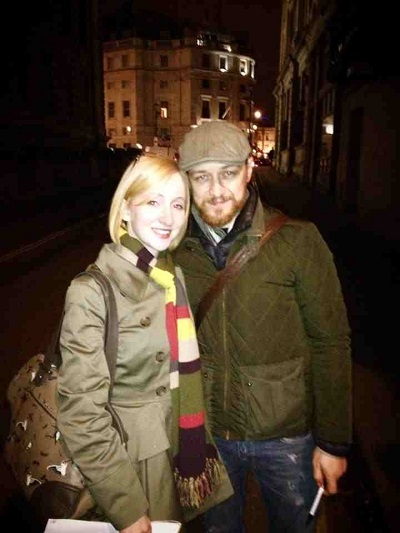 Scott and I saw James' production of MacBeth on Friday, and wow, guys. It was absolutely spectacular. I sat stunned for the full three hour performance, on the edge of my seat. James was breathtaking, and Claire Foy blew me away as Lady MacBeth. The show was gritty and raw and genuinely disturbing in some places. The post-apocalyptic theme really worked for me, and I fell easily into the Shakespearean language simply because of the emotion and pure passion each of the actors breathed into their roles.

I was third row from the front and James was RIGHT THERE. I... just... wow. His energy is electric, the stage crackles when he steps onto it (or rather, comes sprinting on screaming at the top of his lungs, covered in blood). His chemistry with Lady MacBeth gave me shivers.

After the show, Scott and I headed for the stage door at the back of the theater. James came out and jumped out of his skin when a group of screaming girls suddenly launched at him. There was only a small crowd of people (maybe 8 people including myself and Scott), but these girls were loud enough to make up for a truck-load of fans. He could easily have walked away (apart from the lovely young man who played MacDuff's son, the other actors all left without stopping which was sad, but understandable), but James came over and asked if the girls wanted an autograph. They took quite a long time to take the pictures and sign things, and when one of them asked for a third picture because the flash hadn't gone off again, James looked at me and smiled apologetically and I melted right there.

Then he turned to me and Scott and asked if I wanted a picture (since I was clutching my camera) and I said "only if that's ok with you", and he waved a hand and said, "of course, darlin'." He sounded terrible, as though he was losing his voice, and looked completely exhausted. I asked how he was feeling and he said that he had a "fucking chest infection." Poor thing is really pushing himself too hard lately.

He smelt lovely and shook my hand, and even though he put his arm around me for the picture, I didn't quite dare to touch him (so my hand is just kind of... hovering somewhere over his back). He gave me a little nod and wave as he left, and I watched him walk away down the street with the most peculiar, disengaged feeling, as if I was watching a film screen. It didn't feel real!

Then I did a little fangirl dance in the street while Scott just rolled his eyes at me.

James is a genuinely lovely man. It was so kind of him to spare a few moments for his fans, even though he is sick and tired out and could easily have brushed us off. He was very appreciative of our praise regarding the play, and gah - my respect and admiration of this amazing person has rocketed ever higher! I wish I could see the play again; damn London getting all the good shit! Throw some of that awesomeness up to the north of England, please! 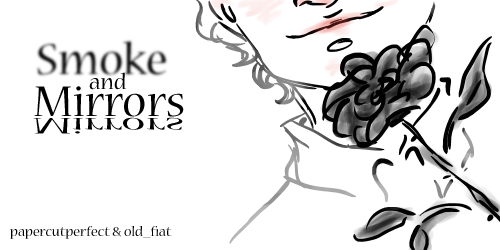 Please go and check out my amazing artist

old_fiat's masterpost here! Her work is truly amazing and deserves more love than just me pawing at the screen.


Thanks:
+ To my wonderful artist and beta,

old_fiat. I couldn’t have written this without you, Anna. Thank you for the gorgeous art and the concrit and the cheerleading and the title and the sobbing.
+ A massive thank you to everyone at the

xmrb_support communities for all of their hard work, support, and epic modding.

I completely revamped my Advent Children Cloud cosplay, changed almost everything. I made a new wig, changed the sweater to a lighter colour, made the boot-straps, adjusted the pants… gah, lots of blood and tears went into it, but it’s finally how I wanted it to be xD

Also tweaked some stuff on my Crisis Core Cloud (making the armour at the moment).

Anywho, onto the pictures, damnit! Apologies for the size, they look better big x3

Pinching this icon meme from the lovely

rainbow_anna, since I am also hopelessly addicted to icons.

Comment on this post and let me know you want to participate. I will choose seven userpics from your profile and you will explain what they mean and why you are using them. Post this along with your answers in your own journal so others can play along.

Here's the ones Anna chose for me to explain...

Anyone who knows me at all should have twigged that I’m a huge Final Fantasy fangeek. Even though VII wasn’t the first one I played, it was the one that got me hooked. Anyway, Cid Highwind is one of my favorite characters; he smokes, swears, loves tea, has a space rocket, and runs like the rest of his body is trying to keep up with his groin. Who wouldn't love him! The scene in VII where he shouts at Cloud to “sit your ass down in that chair and drink your goddamn tea” really stood out to me, not only because it made me laugh like a demented hyena but also because it’s exactly the type of thing I’d shout at someone. Just in a more British way.

Cripes, I feel like such a geek with this one! Twenty-sided dice were used in the game Dungeons and Dragons, the ultimate retro nerd roleplaying game. And of course, rolling number one on a twenty-sided dice was the most frustrating thing on the planet. I love this icon, it appeales to my dry sense of humour. The full stop after the curse makes it read a lot more sardonically than an explanation mark. I also chose this icon because I needed something to fit the mood of any angry posts xD

Bwuhahaha! Sorry, this one always makes me laugh xD Auron is from Final Fantasy X, and I love him to little tiny pieces. In the game, a ‘summon’ is when you call on huge creatures called Aeons to come and help you fight. An ‘overdrive’ is when the Aeon or character can use their special, more powerful attack. And I’m sure we all know what ‘hit that’ means *blushes* So, pretty self explanatory really, a play on phrases such as “I’d hit that like the angry fist of a God” xD

Ah, one of my favorite quotes in the whole world. “Cake or Death?” is a line from one of Eddie Izzard’s stand-up comedy shows (‘Dress to Kill’ I believe). Eddie Izzard is my favorite comedian ever, I can watch his shows over and over and still laugh like a mad thing. This icon is strangely cute, the colours and the cake… even the skull looks like it’s grinning! Anywho, I chose this icon mostly to show that I’m a Eddie Izzard fan – we can all spot each other from a mile away.

HAHAHA xD Another one that makes me laugh a lot. Axel is from Kingdom Hearts, and he’s one of the most popular characters in the games. And a lot of those fans seem to love him entirely for his luminously red, spiky hair. So if he ever got stuck in his hood (most of the bad guys in those games wear long black coats with hoods), the fangirls of his hair would go mental. That, and if he got stuck in the hood with no way of seeing what was going on, the fangirls would be on him like a rash. I chose this icon because, as much as I love Axel, I love teasing him far more.

Ahem. *blushes* Well… I’m a huge Harry Potter fan, ever since reading the first book (though I refuse to watch the films and warp how I see them in my head). And I’m also a huuuuge fan of the pairing Sirius/Remus, they're my OTP. I love this icon so much. The expressions on their faces are just beautiful. Yes, I guess it could be classed as a bit rude, but meh… it’s beautiful. And I also love the contrasting colour of their skin, Remus’ looks so pale and perfect.

Hehehe x3 Xigbar is my favorite bad guy from the Kingdom Hearts games, and my friend Mona and I were saying what we’d do if we ever had the chance to sneak into the villains’ castle. I said I’d follow Xigbar around and jump on him, so Mona drew this for me. Me, shamelessly leaping upon an un-amused Xigbar.
Collapse